The last time I was featured on this site, I brought in a piece about how the ESRB isn’t a viable ‘accessibility’ or safety tool.  In reality:  it’s a ranking system to help retailers determine whether they want certain games on their shelves. Today we’re going on a journey about everyone’s favorite topic:  difficulty in video games.

About three years ago, I had convinced myself that my streaming career was over.  I made the rookie mistake of adding a generally loved franchise as a charity milestone, and we met it without question. I promised that at a certain amount, I would play Dark Souls 3.  I knew that this would be the killer of the channel. I mean, this game was hard. People had grandeur tales of how bosses took them hours to beat, how streamers broke controllers, were stuck for weeks on end.  There was no way I could stand up to the pressure.

I’m now a candidate for Team Hitless, I’ve beaten Dark Souls 3 at soul level 1 (beat the game without leveling), have obtained my platinum trophy, and went on to play and beat Sekiro: Shadows Die Twice along with Bloodborne.  I fell in love with these games! It’s an image I always go back to when I see people online who are adamant that games of this nature don’t require difficulty options.  How the biggest reason I had never played was because I was led to believe that the game was just going to be too hard for me.  And that’s why I’m always going to challenge not just FromSoftware, but game developers at large to keep difficulty in their mind as an accessibility feature.

Everyone’s story isn’t like mine:  what you’re more likely to hear is about how someone tried a challenging game — Dark Souls, Cuphead, Ender Lilies, Hyper Light Drifter, Darkest Dungeon, Touhou Luna Nights (to name a few) —  and wound up quitting it out of sheer frustration.  Many people attribute said grievances to ‘not being good at the game’ when the problem is much more robust than that.

These end-of-life stories are oftentimes a result of confusing or non-existent directions, difficulty spikes out of nowhere, unspoken expectations to ‘figure things out’, or what feels like being ‘stuck’ with no way out of a loop of unfun — and the rallying cry against these stories is always ‘you just need to learn how to be better at the game’.  There’s a prevalent idea that when we talk about ‘difficulty’, it’s as simple as saying ‘make the game easier’,  but what I and many others have started doing is asking what does that look like? Often what many consider ‘easier’ are accessibility options to make the game more manageable.

Many gamers don’t realize that out of the box, developers are trying to push the game in your favor. And that isn’t just XCOM, Celeste does it as well, when you’re supposed to miss a ledge and it pushes you up on it within a certain pixel margin, or how it actually refunds your stamina if you do a wall boost instead of a wall jump. These are all hidden accessibility features that are baked within the game, helping all players in multiple fashions — and they’ve always been baked into games.  What accessibility advocates are asking for are that these types of features be more forward-facing, which frequently falls into a packaging of ‘difficulty.’

A great example of difficulty as an accessibility feature: I recently platinumed Ratchet and Clank: Rift Apart and something I appreciated right away was in the difficulty options, it gave you a clear and concise breakdown of what each option entailed.  Story mode would go unimpacted regardless of your choice, but it wasn’t as simplified as people commonly make it out to be — a lot of thought and critical changes go into providing difficulty;  this mode was gauged by enemy aggression, the amount of damage they dealt, and health. These are common metrics deployed in games — the critical component that many miss, however, is that what is easy for one person isn’t always easier for another.

The assumption is that ‘easier difficulties = less work’, but the workload is relatively the same. Players still must navigate maps and find where to go next, complete non-combat puzzles, and getting everything for the platinum still requires effort.  It allows people to play on their own terms — be it because they have arthritic hand joints, difficulties processing information on screen quickly, or outside of the realm of medical reasons, they can’t afford 20-30 hours of gaming every week.

These modes do an exemplary job catering to everyone without ‘watering down’ the experience.  Too frequently what we see happening is easier modes go the route of undermining players — referring to the player as childlike, locking players from achievements, or removing everything that is a critical part of the game for the sake of ‘making it easier’.  These are all things that are discouraging and disheartening for someone who just wants to experience the game. (I’m currently playing on Challenger.)

When we talk about difficulty as an accessibility feature, we’re not asking for worlds to be wholly devoid of challenge, engagement, or the core mechanics — we’re asking for solutions that can be adjusted and catered for many people. On the topic of ‘core mechanics’ and ‘designer vision’, there has yet to be a philosophy that actually says ‘if you’re not the best at the game you don’t deserve to play.’  Challenge is a subjective topic for me, I like to add challenges on my own terms.

For some, the challenge is learning the different ways you can beat a game you love, or playing once on normal, then again on hard.  By viewing difficulty through the lens of accessibility, it opens a world of evaluating not just how to make your game available to as many people as possible, but also critically looking at how your game is held together. How can difficulty be parsed?

People will often propose, for example, something like ‘if we lower their health too much, it will make it too easy’, but rather than look at it as a detriment, it can be viewed two different ways:

Difficulty is measured in more than just ‘this is easy to beat’ — it’s evaluated by how experience is accumulated, the rarity of stock and items, AI behaviors and mannerisms, tooltip availability, or even the option to lose your spirit essence on death v. keeping it.  I adore Death’s Door because when you die, you don’t lose anything aside from progress.  Did you happen to die right outside the boss’s door?  That’s fine, keep all the spirit essence you accumulated.  Some look at that and say ‘Wow, that makes the game too easy’, but from my perspective that little bit of extra essence may have been just the push I needed to upgrade to a better weapon, faster dodges, or more potent spells.  Or maybe I didn’t spend the essence at all, and now I can reserve it for a later upgrade.

I always think back to my mindset on making Dark Souls 3 a charity incentive, curious as to how the perception of ‘difficulty’ kept me away for as long as it did.  It made me feel small, unwelcome-like I wasn’t supposed to be granted access.  I convinced myself that I was ‘undeserving’ of the game because I was not ‘as good’ as someone I had never met online, or I didn’t meet the bar.  I honestly still want a map (and we’re getting one in Elden Ring!) because not having one adds a difficulty hurdle that frankly?  Isn’t fun.

You would think I’d have different thoughts given I’ve beaten the game without leveling, but I don’t.  Adding ‘challenge’ by purposely removing or obscuring tools that people use doesn’t feel like it can be the best philosophy people think it is — it just keeps people out. If I hadn’t been convinced I wasn’t meant to be a part of the base? I would’ve been challenge running Dark Souls 3 for 5 years now. And as stated at The Game Awards during the innovation in accessibility award: when everyone plays, we all win. 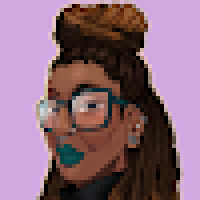 Vanessa / PleasantlyTwstd is a black, asexual Art Director for the upcoming Kickstarter-backed setting book “Into the Mother Lands”, and a part-time content creator on Twitch, focused on community building, charity, and DEI in gaming. Her passion is in activism for Black & queer communities, alongside gaming design and development focusing on accessibility & engagement. She has been seen on: FlameCon, VidCon, LiveWire, GenCon TV, St. Jude Play LIVE's summit, Kotaku, The Verge, Launcher, E3, Valve, and The Jimquisition. She challenge runs and speed runs in her free time, and occasionally writes strategy guides when her cats aren't sitting on her laptop.

See all articles by Vanessa / PleasantlyTwstd