Gameplay is generally accessible, but the lack of options is not acceptable. Enjoyable gameplay that may not be easy to use for some players due to the lack of key rebinds or scalable text.

Doraemon Story of Seasons is a crossover between Doraemon and the Story of Seasons Franchise. Developed by Marvelous and Brownies, the game aims to blend Doraemon’s classic feel with Story of Seasons gameplay. It’s a Slice of Life Farming sim, done in a beautiful watercolor style. It’s been released on PC and Nintendo Switch, though my review will focus on the Switch version. I played in both Handheld and Docked modes, and used a Pro Controller when playing in Docked.

Right out of the gate, Doraemon SoS takes a major accessibility hit. There are virtually no settings. You can adjust the sounds a bit- make the background music louder/quieter, or mute the sound effects (which I promptly did, as Noby’s exclamations when doing any farm chores got agitating quite quickly.) This, unfortunately, is it. There’s no text scaling, no key rebinds, or anything else helpful. Thankfully I found the games default controls and text very manageable, and had no trouble playing, even without the ability to adjust things in game.

Text was easy to read on my part, in both handheld and docked modes. Though the lack of text scaling means that if you needed larger text, you wouldn’t be able to get it. Docked mode on a larger TV screen helped me on low vision days. A white font sits on a dark background for most scenes, and cutscenes have black text on a white background. Speaker labels are present for everyone, in any case. All dialogue is subtitled, with the exception of the partial sentences the characters speak aloud, all in japanese. The fully animated cutscenes (of which there are a few) have speaker labels and are subtitled in white, with a small black trim. I found these slightly harder to read, but still managed. The text in these scenes is larger, and no lines are spoken aloud. All of the text in game, except the text in animated cutscenes, is click to advance, so you can take time to read it.

The dialogue itself is charming, and well translated. Each character’s personality came through nicely, and small colloquialisms were handled well. It was nice to talk with everyone each day, as generally they had something different to say, and helped make the world feel a little more homey.

The visuals in this game are just lovely. The entire thing, with the exception of character portraits and fully animated cutscenes, is done in a watercolor style. It feels like walking around in a painting, and the animations are just as charming. The first few hours of my playthrough were spent simply admiring everything, from the way the crops sprout up to the change in lighting. It’s absolutely unique, and very beautiful.

The UI in game is clean and easy to understand, with a ton of info stored in the tab accessed by hitting the ‘-’ button. Stats for your farm, friendship levels, and quests are tracked here. I never found myself struggling to get the info I needed. There’s a bright highlight around objects to let the player know what they’re facing or going to interact with-I found this very helpful when picking up objects or tilling fields, due to the fixed camera angle. Contextual button prompts are also present, to let you know how to interact with the world around you.

Everything is fairly intuitive, and downright a force of habit if you’ve played previous Story of Seasons or Harvest Moon games. The tutorials can be skipped, but a phone booth stored in the Mayor’s house will let you go back over the tutorials if you need a refresher.

Speaking of tutorials, the beginning of the game is fairly long. The introduction and initial setup take around an hour to get through, so set aside some time the first time you play to let it all unfold.

On to the controls! As there are no options to speak of when it came to the controls, I was a bit nervous about being able to do everything that needed to get done. Thankfully, I found the default setup very manageable. Pressing L+R is not required to start the game. Most activities, like fishing, bug catching, harvesting, animal care, chatting, etc, do not require a press and hold. Charging upgraded tools does require a very short press and hold, but the action is completed automatically once the tool has charged long enough, so there isn’t a timing factor.

Zooming in and out is done with the right thumb stick. Otherwise the camera is fixed. Running, walking and sneaking are determined by how much pressure you apply to the left thumb stick. No button presses required.

Overall, I found the visuals and controls to be easy to use, despite the lack of options. If you’re worried about not being able to play due to the lack of accessibility options, there is a free demo you can try out that will allow you to experience nearly all of the games mechanics, and get a feel for it.

Doraemon Story of Seasons is a very relaxed game, and you’re encouraged to take it at your own pace. I had no trouble playing, even on days when I was very fatigued, or was having trouble processing information.  It’s a good fit for the Switch, and works equally well in both handheld and docked modes. I’d recommend the title for anyone looking for a relaxing game, or trying to pass the time before Rune Factory 4 and Animal Crossing release. The comforting nature of the gameplay and art style makes this game, for me at least, a wonderful way to pass the time. 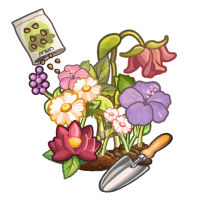 Erin (She/Her) is a digital farmer and grower of plants. She is very fond of Narrative gameplay and dogs. Cheerful, likes to paint. Follow her on Twitter @spooniepixel.

See all articles by Erin