Hello, fellow gamers! I’d like to introduce myself here. My name is Troy. I’m a 44 year old Deaf gamer that started gaming with Pong. I’m presently an Xbox gamer but would like to eventually get a PS4 and a Switch as well, depending on my finances and what the next console generation holds for us. I am a single dad. I have an awesome 11 year old son whom I’ve raised on my own since he was born. I’ll share my story with you here, you might want to grab a snack before reading further because it may get pretty long.

I’ve had hearing loss for as long as I can remember, but my mother told me I had normal hearing at birth which I’ve progressively lost over the course of my life. I was hard of hearing and oral up until I was my son’s age, now 11 in 5th grade. I lost a significant amount of my hearing pretty much overnight. It was a difficult and stressful period of time in my life because at that point I had never met another deaf person. So being the only deaf person I knew was a lonely and terrifying experience. After testing, drugs, and exploratory surgery, an Ear, Nose, and Throat specialist determined that my hearing loss was due to genetics.

That same year I met another deaf kid my age that went to a different school. I spent the day with him at his school but lost touch with him after that. The summer between 5th and 6th grade I had a tutor come in and teach me sign language so I could transfer to public school (I had attended a private Catholic school up to this point). The tutor attempted to teach me SEE (Signing Exact English) which my adoptive parents decided was probably best but it was overwhelming and I was completely unable to follow the interpreter who was hired to work with me so instead of interpreting she started taking notes for me which she would give me after class. While this was a better method of getting the information I needed it made classes extremely boring as I could do little more than twiddle my thumbs and space out all day.

I got myself into some rather serious legal trouble that same year which got me shipped off to mental health facilities for the next 2 years. I emerged halfway through 8th grade and transferred to another school that had a deaf program after which I started high school in the same district that continued the same deaf program for high school students. This was honestly the best fit for me since the drastic hearing loss I experienced in 5th grade. I now had a handful of deaf friends (some which I’m still in touch with sporadically today) and I even had a deaf teacher who was the 1st deaf adult I had ever met. Awesome guy. I learned ASL (American Sign Language) about as fluently as one can being a 2nd language and was now able to follow interpreters in my mainstream classes and the signing of the teachers in my deaf education classes.

I never had a particularly healthy and close relationship with my adoptive parents which was a contributing factor in the legal troubles I had in 6th grade and now again in 11th grade. It became the final straw for my adoptive parents who decided I was no longer welcome in their home. They sent me off to the state Deaf School which provided room and board as well as education. I didn’t really fit in as well there though and being away from my excessively strict adoptive family encouraged me to stretch my wings a little too far and while I steered clear of legal trouble, I broke school rules with enough frequency to be known as the school bad boy. The irony of this is that I dated and fell in love with a girl who was pretty much my polar opposite. She was a rather conservative, religious Christian and despite my Catholic upbringing, I was a liberal atheist. Our relationship didn’t last unfortunately, though our breakup was ultimately due to teenage drama, and not religious differences. But that relationship with her was pretty much my only real emotional connection to the school so I dropped out halfway through the school year.

Since my adoptive parents still didn’t want me back at home, I found myself repeating my early childhood and bounced around foster homes and group homes until one day my social worker told me my birth mother was looking for me and asked if I’d be interested in meeting her. But before this happened I had returned to my old school to finish the credits I had left that I needed to graduate. Out of fear that I would resume old habits and get into trouble again the school did not want me to stay longer than necessary and I was the only student in the history of the school to opt in for a midterm graduation. I had no ceremony, no cap and gown. No party. I just left and moved on with my life.

After meeting my birth mom my birth family took me in like I had never left and immediately accepted me as family. I did try to keep in touch with my adoptive family but they haven’t been very receptive. I’ve pretty much been estranged from them for nearly 25 years now. My son has never met any of them.

I’ve since lost pretty much all of whatever hearing I had left gradually in my late 20s. My last audiology appointment determined that my level of hearing loss was untestable as I could not even hear the loudest beeps their equipment was capable of making.

In 2004 I got back in touch with that conservative Christian girl I dated in high school. She had found my email address on the school website and emailed me. She was married with two kids but apparently wasn’t happy in her marriage so she separated from her husband and filed for divorce. Old feelings were rekindled within both of us and we embarked on another relationship that unfortunately didn’t last but produced my incredible son. This time it was our religious differences that caused our relationship to end. Despite telling me that she could handle my atheism, she had been secretly hoping that one day with her influence I would change my beliefs but over the course of our relationship she came to realize how strong my atheism is and decided that she needed a partner that shared her own beliefs. Our breakup was painful but amicable.

I currently reside in the state of Minnesota where I’ve lived for most of my life, but I moved to Oregon and Washington state briefly. I would have stayed but my mother had terminal cancer and wanted to spend the time she had left with my son and I so moved back home. She passed away in January. I’d love to move back to Oregon one day but presently lack the necessary funds to finance a move back.

As a gamer I’m mostly into single player and co-op games. I rarely play competitive multiplayer. I tend to prefer 3rd person action games and first person shooters. But I’ll also play the occasional puzzle game, platformer, Lego game or story based game. I’m not really into fighting games or sports games. Some of my favorite series are Assassin’s Creed, Mass Effect, Uncharted (I owned a PS3 and 360 last gen), The Last of Us, Far Cry, Splinter Cell, Portal, Batman Arkham, Grand Theft Auto, Lord of The Rings Shadow games, Red Dead, Watch Dogs and Wolfenstein to name a few.

I can be found streaming nearly every day on Mixer often co-streaming with friends. I can also be found on Twitter. I’m looking forward to becoming a part of “Can I Play That?” as a regular contributor. 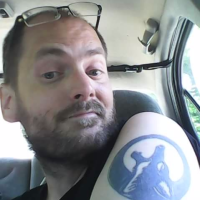 Deaf. Single Dad. Atheist. Gamer. My days are frequently spent playing Xbox and guzzling Mountain Dew. I can often be found streaming my gameplay on Twitch (https://twitch.tv/DeafAtheist) or posting about politics and gaming on Twitter.

See all articles by Troy