Say hello to the newest contributor to Can I Play That?

Growing up every opportunity was available to me. My parents taught me the power of making a connection early on. What I chose to do instead was waste all that, drink, party, and continue to say “This is the last one.” In August of 2009, that all changed from a backyard diving accident resulting in a C5 spinal cord injury. What started out as your stereotypical college dropout day, ended with losing everything I knew.

When I was 20 I started working at Gamestop. For a company that basically pays their employees in games (because you spend your paycheck before you leave on payday), it was an amazing experience that taught me a lot about respect. Never did I realize the diversity of gamers until I was fired at the beginning of 2009. However, right before I was let go, one particular game came out that has now changed my life: Fallout 3. And in the next 10 months, I became a lone wanderer.

When you have an injury like mine you lose the ability to control your hands. You want nothing but to escape back to how things were. I wanted to be aiming and shooting ghouls, explore the destroyed DC area and take down D with mini-nukes. I just didn’t know how anymore. I spent months believing I’d never do the one thing I loved to do. Then it hit me… Controller customization settings! Bethesda games have one setting that most games don’t! Soon I was running through the wasteland just skipping and .

Once this happened I used it as a platform to “stand on.” I wanted anyone else in my situation to see that it’s not all lost. This train of thought led me to work with programmers at the University of Michigan and provided feedback on creating a mobile app that was fun and accessible to those newly injured. From there I volunteered in the same rehab I recovered in and learned many new techniques to adaptive gaming. I brought in old games from NES to Playstation because I didn’t just want new games to be more accessible, but I wanted all the games to be.

As awesome as the idea is to make ALL games more accessible, I was given the opportunity to start a non-emergency transport service with my brother. Never giving up that idea I created a pseudonym (Johnny Quad Reviews) and began a journey that garnered a lot of needed experience in the world of office management and customer service. I created a repertoire with clients and case managers while maintaining a fleet of vehicles driving throughout Metro-Detroit and beyond. My business eventually was sold by our investors and I’ve since parted ways. Looking back, I’ve now got the tools to do that awesome idea and I’m making the wheels turn. This was all thanks to the simple controller customization settings within Fallout 3

The games were calling me back. I dove into any game I could get my hands on. What’s accessible? What genres work best? Does the game let you change the button layout? Quickly it became pretty clear developers weren’t doing much, but why? They know we’re at home trying to play these games. During this time, I would contact Gamers Outreach and volunteer when possible. It’s an amazing organization that brings games to children’s hospitals. Doing work for them is so rewarding. The fact that they have a partnership with Microsoft now makes me believe I should’ve kept playing games a few years ago.

I’m here for good now and looking forward to the future. Bethesda for transferring a controller option on PC to PS3, sorry you’re going through some relationship issues.

Learn more about Johnny Quad at his site here. 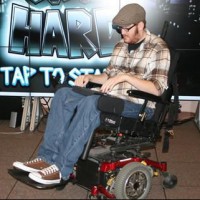 See all articles by Johnny