My name is Melissa, and I am 29 years old. I live in rural Northern Saskatchewan, Canada. I am physically disabled and have enjoyed video games since I can remember.

My disabilities stem from a rare form of muscular dystrophy which affects 50% of my skeletal muscle tissues. It’s believed to be Central Core Disease/Central Core Myopathy. This caused me to develop severe scoliosis from a young age and require breathing assistance when I sleep in the form of a BiLevel Positive Airway Pressure device (BiPAP) through full face mask. I have used a power wheelchair since I was four years old.

I am the youngest of five siblings, I have three older brothers and an older sister. Two of my brothers and I are close in age, with them being two and three years older than me.

I remember lots of times growing up when my brothers would take me downstairs with them to watch them play video games and even let me join in. I remember having issues with my hands not being big enough to hold most controllers such as the SEGA Genesis controllers or PlayStation 1 controllers. That didn’t stop them from issuing me with a quick video game beatdown, because we often played by the rules of “I play the Winner!” or “When you die, it’s my turn.” Or my most hated rule “Oldest to youngest!”

After that, I remember when Sony released the first “DualShock” controllers. That was just around the time when I started to get the hang of holding the PlayStation controller and pressing its buttons. Suddenly I had to deal with the controller rumbling out of my grip upon being hit by my brothers in a fighting game, who laughed and proceeded to take me out of rotation without mercy. Then came the PS2, and I still had a hard time because my hands would go numb and ache from the rumble motors of the DualShock 2.

By this point, I mostly enjoyed gaming on a laptop with a mouse and keyboard. I preferred laptops because of my limited reach so everything was easy to access and there was less key-travel distance. Having a laptop for gaming presented new challenges such as no option to upgrade specs easily and the inability to run increasingly more demanding games. Multiplayer involved stringing LAN cables across our kitchen/living room so my brother Jon and I could play Battlefield 1942 together.

I still played on the consoles periodically, especially as my hands grew bigger. I remember coming up with some tricks, like when Jon and I used to duel on Red Dead Revolver and I’d use my face to draw my six shooter by flicking the left thumbstick back and forward with my chin for a quick succession of Groin-Gut-Headshot wins.

In 2006, it was just me and Jon left at home. He saved up and bought a PS3 and was excited because he knew that I struggled with the PS2 with the DualShock 2 rumble, the controller cords getting hooked on my chair and the power switch being at the back of the system. He knew all of that would be eliminated with the new PS3’s wireless, rumble-less SIXAXIS controllers which could turn the system on via Bluetooth. I was starting to get frustrated with trying to game on my laptop. I found myself a 3rd party PS3 controller that had a round directional pad like the recent XBOX Elite controllers do which makes diagonal presses easier. I’ll never forget booting up our new PS3 with some two-player Resistance: Fall of Man with Jon, who had the official PlayStation 3 SIXAXIS controller and me with my 3rd party one. A few hours in, my character unexpectedly chucked a grenade at Jon’s back. Quick to defend myself, I assured him I didn’t do it, and he quickly discovered it was some interference with the 3rd party controller. “THIS IS WHY YOU DON’T BUY THIRD PARTY JUNK!” he shouted, while I laughed. A while later, he surprised me with an imported Ceramic white DualShock 3.

During this time, we also got the Nintendo Wii. There were few games I could enjoy but it was fun to see our whole family interact during the holidays when everyone came home. Motion controls are extremely hard for me because I can’t reach very far, especially while holding the remotes, as light as they were. I played with the remote and nunchuck for Mario Kart instead of just the remote, and for Baseball in WiiSports, I learned that I could slap the remote against my shoulder to register as a swing or throw.

It wasn’t until the end of 2008 that I switched completely to PlayStation 3 for gaming. At the time, I really had no other options, not that I would have wanted to avoid switching. We lost our house to fire in the spring of 2008. We lived in a small trailer about 30 minutes away from where we called home for 9 months while insurance rebuilt. Back on dial-up internet and Jon moved away and rightfully took his insurance-replaced PS3 with him. In October I got my own PS3, and I played LittleBigPlanet for the remainder of our time in the trailer. It honestly kept me sane while we waited to go back home. Once we got back to high-speed internet at home in February of 2009, I took off on my console gaming journey. My brothers Will and Jon were only a Game invitation away on PlayStation Network.

My old nemesis was back in the form of the DualShock 3, but I was determined to beat it this time. I discovered my issues at that time were the L2/R2 triggers and L3/R3 tactile click buttons. My hands were strong enough to handle the rumble and for some games I simply turned the rumble off in the system settings. I strengthened my fingers to pull the L2/R2 triggers by playing ModNation Racers, eventually earning the platinum trophy for completing it. I still had trouble with my L3/R3, so games like Call of Duty and Battlefield which I loved so much always had me at a huge disadvantage of not being able to sprint or melee/knife. A few years in, I decided to research for a solution and I came across a YouTube video for relocating the L3/R3 buttons to a different spot on the controller. I studied various controller disassembly videos and basic soldering guides and with some muscle help from Mom and a tiny bit of drill help from Dad, I successfully relocated, wired and soldered 2 new buttons in the perfect spot on one of my controllers. I won’t forget the exhilarating rush of suddenly being level on the battlefield online.

With the release of the PlayStation 4 in the fall of 2013, I was excited and scared. Excited at the next console leap, but scared by the new design of the larger, heavier DualShock 4. I was suddenly farther back than I ever was. I had to learn to handle a totally new controller and worse yet, at first I found the tension of the thumbsticks to be greater, needing more force to move them than the DualShock 3. Suddenly ALL shooters relied on the tougher triggers and few games allowed L1/L2 R1/R2 swapping. There were also not many videos out that identified solder points on the DualShock 4 either. I was feeling pretty helpless.

After yet more research, I found a modding forum and I listed my issues. A few modders offered advice, but one in particular went above and beyond. He discussed with me a few things he thought might work. I showed him where I relocated my L3/R3 on my DualShock 3, but he feared that same placement wouldn’t work on the DualShock 4. He instructed me to open one of my DualShock 4s and take out the little metal springs in the L2/R2 triggers. He guessed that with my strength, I could get away with not bumping the triggers accidentally and that with the springiness of the rubber membrane underneath the triggers, they’d naturally spring back. It was a small, relatively easy “fix” that could get me sorted until he could think of other solutions for my other issues.

After a few weeks of enjoying the functions of L2/R2, I discovered my thumbs had gotten stronger to move the thumbsticks. It may well have just been a confidence boost which got me through that one. I kept in contact with the modder and he managed to find the right button style that was small enough to fit in the tiny spot I needed my L3/R3 in. He offered to pick up a new DualShock 4 and install the buttons for my L3/R3 and remove the trigger springs, I just had to pay for the controller, parts and shipping. I did and two weeks later, I was back out there in the trenches, with my friends and brothers, getting into all kinds of adventures.

I have him do all my controllers now, it’s much easier to have him do the work because it’s faster and done professionally, and it’s extremely reasonably priced, averaging $80 USD all shipped for a new controller, or $40 USD for one I send him.

I always preferred PlayStation over Xbox, partly because of brand loyalty, growing up, we always had a PlayStation. Back in the PS3/360 days, PlayStation Network was free. And I found the Xbox 360 controller to be very awkward and large/heavy. I was always curious about Xbox exclusives like Halo and Gears of War. When the Xbox One S released, I decided to gamble on my ability to conquer that controller. It seemed lighter than how I remembered the 360 controller, and my modder managed to relocate my L3/R3 to the same relative spot on it as my DualShock controllers, with the same type of buttons. I managed to play through my first Xbox exclusive game from start to finish. I admit, I’m still not 100% comfortable with the shape, but I can handle it. With a bit more time and effort, I’ll be comfortable with it too, but my heart is still with PlayStation.

Recently, Microsoft developed a new controller, specifically for people like me, because yes, we DO exist and we do enjoy video games, I’d argue more so than the average gamer. I’m thrilled Microsoft has taken the first steps to level the playing field for those who have different ability levels than me. I consider myself very lucky. I don’t think I’ll ever need an Xbox Adaptive Controller (XAC) since I’ve been able to have the standard Xbox One controller slightly modified, but I’m so happy it’s available and I’d be thrilled to try one out someday. I hope that PlayStation is working on something similar and if so, I’d love to be a tester to provide feedback.

With thanks to Microsoft, and the release of the XAC as well as so many developers implementing accessibility options in their games recently, I’ve been inspired to share my own story and start a new journey and become active in making content to bring awareness to accessibility in video games. I want to thank “Can I Play That?”, as well as Twitter users, Erin Hawley/@geekygimp, Grant Stoner/@Super_Crip1994, Vivek Gohil/@uncannyvivek, Cherry Thompson/@cherryrae, Susan/@OneOddGamerGirl, Courtney/@CyclopediaBrain, Dan/@AccessibleDan and Ian Hamilton/@ianhamilton_ for inspiring me. 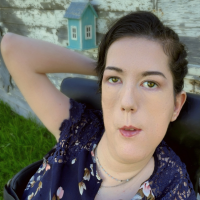 See all articles by Melissa